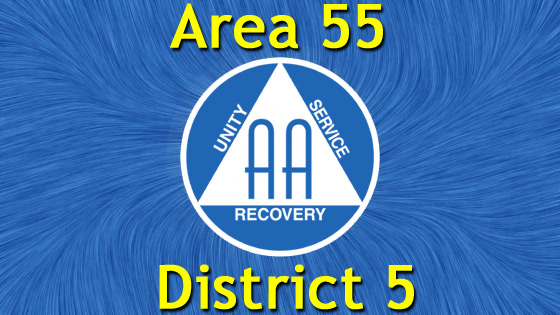 The District 5 DCM position is vacant. If interested in becoming District 5’s DCM, send an email to alt.delegate@area55aa.org

Groups within District 5 include:

“Though many theologians hold the sudden spiritual experiences amount to a special distinction, if not a divine appointment of some sort, I question this view. Every human being, no matter what his attributes for good or evil, is a part of the divine spiritual economy. Therefore, each of us has his place, and I cannot see that God intends to exalt one over another.

“So it is necessary for all of us to accept whatever positive gifts we receive with a deep humility, always bearing in mind that our negative attitudes were first necessary as a means of reducing us to such a state that we would be ready for a gift of the positive ones via the conversion experience. Your own alcoholism and the immense deflation that finally resulted are indeed the foundation upon which your spiritual experiences rests.”

I’m Part Of The Whole

When I first came to A.A., I decided that “they” were very nice people — perhaps a little naive, a little too friendly, but basically decent, earnest people (with whom I had nothing in common). I saw “them” at meetings—after all, that was where “they” existed. I shook hands with “them” and, when I went out the door, I forgot about “them.”

Then one day my Higher Power, whom I did not then believe in, arranged to create a community project outside of A.A., but one which happened to involve many A.A. members. We worked together, I got to know “them” as people. I came to admire “them,” even to like “them” and, in spite of myself, to enjoy “them.” “Their” practice of the program in their daily lives—not just in talk at meetings—attracted me and I wanted what they had. Suddenly the “they” became “we.” I have not had a drink since.