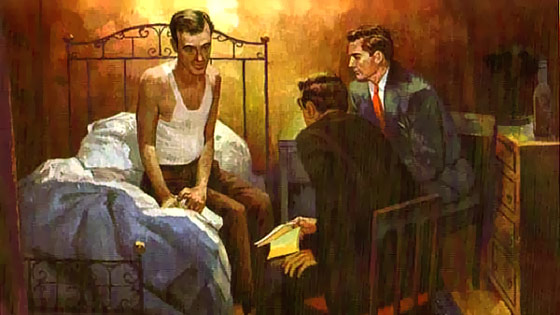 On a Friday night, September 17, 1954, Bill Dotson died in Akron, Ohio. That is, people say he died, but he really didn’t, wrote Bill Wilson. His spirit and works are today alive in the hearts of uncounted AAs, and who can doubt that Bill already dwells in one of those many mansions in the great beyond. Bill Dotson, the Man on the Bed, was AA number 3. At his death, he had not had a drink in more than nineteen years. His date of sobriety was the date he entered Akron City Hospital for his last detox, June 26, 1935. Two days later occurred that fateful day when he was visited by two sober alcoholics: Dr. Bob Smith of Akron, Ohio, and Bill Wilson, a guest of Dr. Bob’s from New York.

A few days before, Dr. Bob had said to Bill: “If you and I are going to stay sober, we had better get busy”. Dr. Bob called Akrons City Hospital and told the nurse, a Mrs. Hall, that he and a man from New York had a cure for alcoholism. Did she have an alcoholic customer on whom they could try it out? She replied, “Well, Doctor, I suppose you’ve already tried it yourself?” Then she told him of a man who had just come in with DTs, had blacked the eyes of two nurses, and was now strapped down tight. He’s a grand chap when he’s sober, she added. Dr. Bob prescribed some medications, and then asked her to transfer him to a private room. He also put him on a diet of sauerkraut and tomatoes. That’s all he was allowed to eat during his hospitalization. The nurse told Dr. Bob and Bill that Bill Dotson had been a well-known attorney in Akron and a city councilman.

But he had been hospitalized eight times in the last six months. (Bill Wilson sometimes said six times. Following each release, he got drunk even before he got home. Bill’s wife, Henriett Dotson, had talked to Dr. Bob and Bill earlier. When she told her husband she had been talking to a couple of fellows about drinking he was furious at her disloyalty. When she told them that they were a couple of drunks Bill didn’t mind so much.

Henrietta apparently had quite a conversation with the two men, and she told her husband that their plan for staying sober themselves was to tell their plan to another drunk. Years later, Bill Dotson reflected on the jumbled thoughts in his mind as his wife left and he began to lapse back into withdrawal stupor: All the other people that talked to me wanted to help me, and my pride prevented me from listening to them, and caused only resentment on my part, but I felt as if I would be a real stinker if I did not listen to a couple of fellows for a short time, if that would cure them.

So Dr. Bob and Bill talked to what may have been their first man on the bed. They told them of the serious nature of his disease, but also offered hope for a recovery. We told him what we had done, wrote Bill, how we got honest with ourselves as never before, how we had talked our problems out with each other in confidence, how we tried to make amends for harm done others, how we had then been miraculously released from the desire to drink as soon as we had humbly asked God, as we understood him, for guidance and protection. But Bill Dotson was not impressed. He said, “Well, this is wonderful for you fellows, but can’t be for me. My case is so terrible that I’m scared to go out of this hospital at all. You don’t have to sell me religion, either. I was at one time a deacon in the church and I still believe in God. But I guess he doesn’t believe much in me”. But he did agree to see Dr. Bob and Bill again.

They came again the next day, and for several days thereafter.

When they arrived on July 4, they found Bill’s wife, Henrietta, with him. Eagerly pointing at them, he said to his wife, “These are the fellows I told you about, they are the ones who understand”. Before they could say anything, he told them about his night, how he hadn’t slept but had been thinking about them all night long. And he had decided that if they could do it, maybe he could do it, maybe they could do together what they couldn’t do separately.

It was apparently on that day that he admitted he couldn’t control his drinking and had to leave it up to God. Then they made him get down on his knees at the side of the bed and pray and say that he would turn his life over to God. Before the visit was over, he suddenly turned to his wife and said, “Go fetch my clothes, dear. We’re going to get up and get out of here.” He walked out of that hospital on July 4, 1935, a free man, never to drink again.

AA’s Number One Group dates from that day. That fourth of July they had plenty to celebrate. So they had a picnic. The Smiths, Bill Wilson, the Dotsons, and Eddie Riley, the first alcoholic they tried to help were there. (Eddie didn’t get sober at first, but later he did, and Eddie said in a talk that there were two firsts in A.A. – the first one who accepted the program and the first who refused it.)

Within a week, Bill Dotson was back in court, sober, and arguing a case. But at first his wife was doubtful. He had previously gone on the wagon and stayed sober for long periods. But then he drank again. Would this time be different? And he hadn’t had that sudden transforming experience that Bill Wilson talked about. When Lois Wilson visited Akron in July of 1935, Henrietta shared these fears with her, and asked Lois whether she ever worried about her Bill drinking again. Lois answered without hesitation, no. Never.

The message had been successfully shared a second time. Dr. Bob was no fluke. And apparently you did not have to be indoctrinated by the Oxford Group before the message could take hold. The three worked with scores of others. Many were called but mighty few chosen; failure was our daily companion. But when I left Akron in September 1935, two or three more sufferers had apparently linked themselves to us for good, wrote Bill. Dotson’s story was not included in the first edition of the Big Book. Kurst seems to think it was because Bill Dotson’s credentials, were apparently too blatant: highly respectable upper middle-class background, above average education, intensive youthful religious training which had since been rejected, and former social prominence recently nullified by such behavior as his assault on two nurses. But most believe it was because Dotson had insisted on being paid for his story.

Bill Wilson wrote his story for the second edition after Dotson’s death.

It appears in the Big Book as “AA Number Three.” He based the story on tapes of Dotsons talks, and on his own memory. Old timers in Akron, according to Dr. Bob and the Good Oldtimers, recalled that Bill Dotson, was indeed a grand chap when sober. They remembered him as one of the most engaging people they ever knew. One said: “I thought I was a real big shot because I took Bill D. to meetings”.

Another noted that, though Bill Dotson was influential in the area he was not an ambitious man in AA. He wasn’t aggressive, just a good A.A. If you went to him for help he would give you help. He would counsel with you. He never drove a car, but he went to meetings every night. He’d stand around with his thumbs in his vest like a Kentucky colonel. And he spoke so slow, you wanted to reach out and pull the words from his mouth. I loved to be around him. He put you in mind of a real Easy Does It guy – Mr. Serenity.
His wife, looking back in 1977, described him as a great alcoholic who, like other alcoholics, didn’t want to get drunk. She reportedly remembered telling her pastor, “You aren’t reaching him. I’m going to find someone who can if I have to see everyone in Akron”, and she prayed with the pastor of another church that someone her husband could understand would visit him in City Hospital, where he had been admitted with some kind of virus. I have found no reference to his age when Bill and Bob found him, but Bill keeps referring to him in the literature as old Bill D.
In a memorial to Bill Dotson, Bill Wilson wrote: “The force of the great example that Bill set in our pioneering time will last as long as AA itself. Bill kept the faith – what more could we say?”